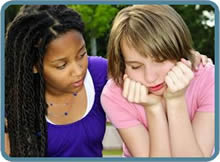 How can I continue this pregnancy when my boyfriend said he’s leaving if I have this baby?

So the price of his staying is to end your child’s life?  Do you really think you’ll enjoy being with him when you remember the price you and your child had to pay for that privilege?

Why do you think relationships break up so often after an abortion?  From his point of view, he’s relieved that you were willing to go through with it.  He was rescued from his responsibilities.  But do you think

And what about YOU?  Perhaps you’ll be the one to break up with him!

Why would you do that after you had an abortion to keep him?