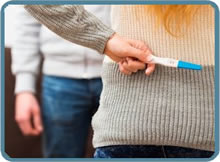 How can things work out when my partner blames me for getting pregnant?

One person of a couple blaming the other for a pregnancy indicates that:

But biology isn’t the real issue here, is it?

Does a blaming response say something about the relationship?  Yes, it does.  But don’t forget – people grow in relationships.  People mature by facing challenges and working through them.

If those reasons played a factor in his blaming, he may have a change of heart in time, once he calms down and realizes that a baby can, indeed, be welcomed into your lives.